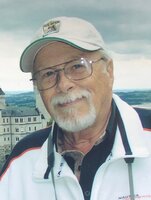 Middlesex, NJ – Joseph J. Waide, 88, passed away in the early hours of October 23, 2021 at his residence with loving family at his side.  Born and raised in Brooklyn, NY to the late Joseph T. and Emma (Lang) Waide, Joseph resided in the Bronx as a teenager and since 1962, has been a resident of Middlesex.

He served his country proudly in the United States Air Force during the Korean War.  Joseph then began his career as a Mechanical Engineer for Mobil Chemical Corporation in Edison.  He had a love for photography, golf, wood-working and above all things, he enjoyed every moment spent with his family, especially his grandchildren.  He also enjoyed visits to Windham NY and traveling to Germany with his wife to visit his extended loving family.

In his younger years, Joseph was a dedicated resident of the town, having been active with the Middlesex Planning Board, Zoning Board and Environmental Board.

Predeceased by his wife Agnes in 2019, daughter Deborah Cowell and grandchildren; Angelica Waide and Brianna Cowell, Joseph leaves behind his loving family; sons Joseph and his wife Maria of Middlesex, Kevin and his wife Michele of Stewartville, Brian of Elkin, NC, daughter Amybeth Gorman and her husband Jim of Middlesex, son-in-law Chuck Cowell and sister-in-law Linda Hahn of Baton Rouge, LA and many nieces and nephews.

A gathering celebrating his life will be held at Middlesex Funeral Home, 528 Bound Brook Road, Middlesex, NJ 08846 on Wednesday, October 27, 2021 beginning 2:00pm.  Prayers and military honors will conclude the services for Joseph at 3:45pm.