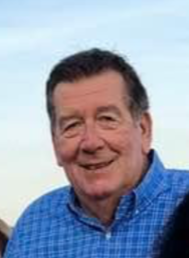 Please share a memory of Ludwig to include in a keepsake book for family and friends.
View Tribute Book

Born in Plainfield to Ludwig and Anna Stiegelmayer, Butch was a life-long resident of South Plainfield. He proudly served our country during the Vietnam War as a United States Marine. He was a popular speaker, recounting his experience in Vietnam, at area high schools and middle schools.  He especially loved participating in the Living Lessons Program in Montville.

A decorated veteran, Mr. Stiegelmayer was a recipient of 3 Purple Hearts and 2 Gold Stars in addition to receiving several other Commendations, Campaign Ribbons and Medals.

Butch spent 40 years in the lighting business, managing his own business for the last 20 years.

Butch’s favorite times were spent every summer in Beach Haven surrounded by his family.  He especially enjoyed spending time with his grandchildren, who affectionately called him “Papa”.

An avid golfer, he spent almost every weekend playing with his sons. He loved to fly fish. His other interests were watching all sports, especially the Yankees and professional golf. He served as President of the St. Joseph’s High School Fathers Club for several years. Coaching his sons in baseball, soccer and basketball was a favorite pastime of his.  His family meant the world to him!

Predeceased by his parents and sister, Patricia Pfister, Butch is survived by his loving wife, Mary Lou (Garrubbo), married for 52 years, two children, Mark (Alyssa) Stiegelmayer, of Mahwah, NJ and Ryan (Tracy) Stiegelmayer, of Stamford CT.  Butch leaves behind three grandchildren, Cameron, Hudson and Ava.  He is also survived by Carol (Peter) Boyer and Dawn (Jon) Lippi, his devoted sisters-in law and 4 nephews and nieces, along with a host of extended family and friends.

Cremation Services are being held privately.

In Lieu of flowers, donations can be made to the Center for Hope Hospice and Palliative Care, 1900 Raritan Rd, Scotch Plains, NJ 07076

Look inside to read what others have shared
Family and friends are coming together online to create a special keepsake. Every memory left on the online obituary will be automatically included in this book.
View Tribute Book
Share Your Memory of
Ludwig
Upload Your Memory View All Memories
Be the first to upload a memory!
Share A Memory
Send Flowers
Plant a Tree
Admin Login | Website powered by FuneralTech & TA | Privacy Policy | Terms of Use