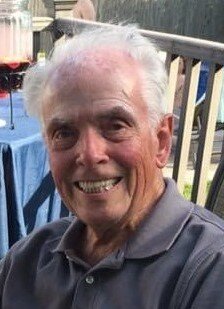 Please share a memory of Richard to include in a keepsake book for family and friends.
View Tribute Book

Richard Lenihan, 84, passed away peacefully on Wednesday, July 13, 2022, at his home in Piscataway, NJ surrounded by family.

Born in Brooklyn, New York, to the late John and Edith Lenihan, Richard grew up in Brooklyn and resided in the Flatbush section with his wife Katherine (Murphy) before moving the family to Piscataway in 1967.

Richard made his career in the Ocean Freight Industry, beginning his career at Moore McCormick Lines and retiring from General Dynamics. Following his tenure in the shipping industry, Richard began working for Piscataway Township retiring in 2009.

An avid runner, Richard was proud of completing the New Jersey Waterfront Marathon and the Boston Marathon. He also enjoyed time spent fishing, golfing, and watching sports. He could be found cheering on the Giants, Notre Dame Football, and Piscataway HS Football.

Richard was a proud member of the Piscataway community. Over the years he coached Little League Baseball and CYO Basketball, was a member of Rivercrest Cabana Club, and a parishioner of Saint Francis Cabrini Church.

Predeceased by his parents; wife Katherine; and brother John Lenihan, Richard leaves behind his two children, Michael (Dea) of Westfield, NJ, and Coleen (Christopher) of Piscataway NJ, and two grandchildren, Matthew (Laura) and Brendan. Richard will also be missed by his dear partner, Arlene Bicknell, along with a host of extended relatives, friends, and his fellow great neighbors.

In Lieu of flowers, donations may be made to a charity of your choice in Richard’s name.